Blue with hints of Red and White
Childhood Phone is an antagonist in Sweet Dreams, and one of the antagonists in Intermission 1. Not much is known about it for right now other than it's appearance, more information will be added when new information on the game is revealed.

It is a phone resembling the phone from fnaf 4.Except it is detailed and has a grim face with soulles eyes with a skeleton's nose and a mouth that has gnarly teeth.It has 4 wheels, the front 2 is white and small while the other is big and red 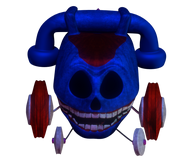 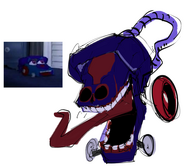 A concept art of Childhood Phone.