Purple/Black
Childhood Robot is an antagonist in Sweet Dreams, and the main antagonist of Intermission 1. Not much is known about him for right now other than his appearance, more information will be added when new information on the game is revealed.

He’s the toy robot from FNaF 4 but bigger and, he lacks any eyes.

Ditto, but the second version.

Ditto, but the third and final icon. 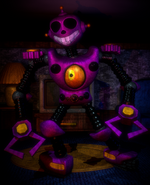 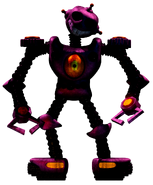