N/A
Dream Chica is an antagonist in Sweet Dreams. Not much is known about her for right now other than her appearance, more information will be added when new information on the game is revealed.

Dream Chica is a yellow chicken plushie. She seems to be sporting small, sharp teeth. She also has a white bib with "PLAY TIME" instead of "LET'S EAT" written on it. She also sports a cupcake with X eyes and stitch-looking teeth in her left hand. Unlike her original counterpart from the actual games, Dream Chica has buttons for eyes and lacks eyebrows. she also sports a pair of wings, unlike the original chica who had arms and hands in the regular fnaf games. 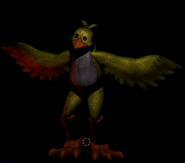 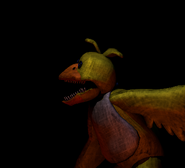 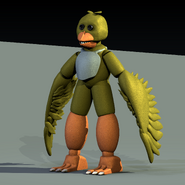