TBA
Dream Plushtrap is an antagonist in Sweet Dreams. Not much is known about him for current moment other than his appearance, more information will be added when new information on the game is revealed.

Dream Plushtrap, as original Plushtrap is a plush toy of original SpringBonnie/Springtrap character from Five Nights at Freddy's game series. Unlike other Dream Animatronics, he always keeps his mouth closed and sits on the chair on the teasers. Unlike his original counterpart, Plushtrap, his left eye and left ear are missing, more resembling Springtrap. He also has tears on his body, revealing plush stuffing and wires. 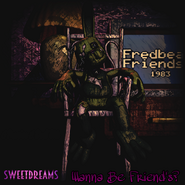 Ditto, but updated to look better. 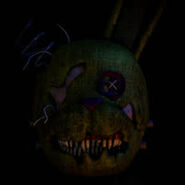