Dream Puppet is an antagonist in Sweet Dreams. Not much is known about them for current moment other than their appearance, more information will be added when new information on the game is revealed.

Dream Puppet is a plush toy version of original Puppet character from FNaF 2 video game and a mascot of fictional pizzeria Freddy Fazbear's Pizza. Unlike the other Dream Animatronics, they have small teeth that are not sharp, without gums visible, and closer to base of their tongue. Unlike his original counterpart from the original games, Dream Puppet have buttons for eyes and teeth and a movable jaw. 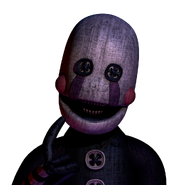