For the profile page see User:LuiTheArtist

Lui was the main developer of Sweet Dreams. He also was the main developer of his canceled Five Nights at Freddy's fan-games "Soul Effect" and "Sugar Coating." Also he was the second modeler for Galva_'s Five Nights at Freddy's fan-games WEEKEND_ and The Twisted Carnival. Let's get into the real shit though. Sometime over the development of Soul Effect, Lui became a self-centered prick who did things with complete disregard for the other team members. Whether or not this is because of them becoming Phil's personal simp is unkown. Over the course of Sweet Dreams, they would: Change ideas without saying anything, sometimes even acting like the new way was how it always was, would forget about ideas that we were using, refused to take criticism, claiming that because it was his own game he could do whatever he wanted, showed off things way early without consulting the team, even after we expressed he shouldn't, even doing so at least once on a game he was only a modeler for, treated an artist who was on the team for a short while before they left badly because their art style was "too cartoony," and a bunch of other things that I probably can't remember right now. At a certain point, he had gotten so far up his own ass that he somehow looped back around and double penetrated it. Now, this all probably sounds a bit dumb coming from me. If you didn't know, my role on the team was that of the mechanics guy, aka something that literally anyone else could have done. I was only really there because I was friends with Lui and another friend on the team. However, this other friend, wasn't a superfluous addition to the team. They were one of the animatronic concept artists. And they, like me, were treated like trash. As I draw this to a close, I'd like to answer the question that you're likely asking: Why the hell would you put this much time and effort into some callout post Lui likely won't see or care about that's about drama that happened years ago? Are you pathetic? Short answer: I was bored. Long answer: I found out that I was still on here as a team member, tried to edit myself out before realizing that I couldn't (or maybe I can and my wiki edit knowledge is non-existent), and then realized that I could edit Lui's profile to say how much of a dick they were/still are. I then decided that, if this is going to be my only time actually talking about it, I may as well go all in. And also I really didn't have anything better to do today. Anyways, last bit before I end this. A message for Lui (if he somehow sees this): Fuck you, you're a jackass, I hope that both I and my friend never have to work with you again. And a message from my friend: "I wouldn't let you suck beans out of my ass." Anyways, uh, cya, have a good day lmao. 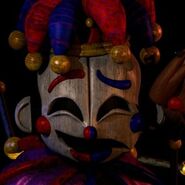