N/A
Phobia is a mysterious antagonist in Sweet Dreams. Not much is known about it for right now other than it's appearance, more information will be added when new information on the game is revealed.

Phobia is an endoskeleton with sharp teeth with ears.It has skeletal fingers and feet that resembles any nightmare endoskeleton from fnaf 4. 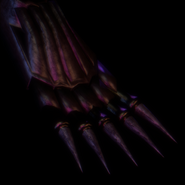 A teaser image of Phobia before it's reveal.

Ditto but with higher brightness level. 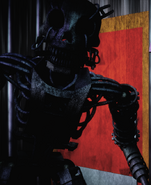