Garage
Windup Freddy is an antagonist in Sweet Dreams. Not much is known about it for right now other than his appearance and his location, more information will be added when new information on the game is revealed.

Windup Freddy is a orange-brown windup bear toy a light shade of brown on both his stomach and muzzle. He seems to be sporting small sharp teeth. His gums are exposed, similar to Dream Animatronics. Just like original Toy Freddy from Five Nights at Freddy's 2, he has bright red cheeks and he wears a large black bowtie and a black tophat with red stripe. Unlike Dream Animatronics, he has black shiny sphere eyes instead having buttons. 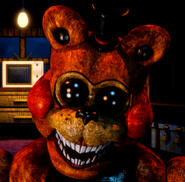 Ditto, but with higher brightness level. 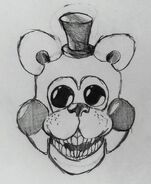